South Korea has reported another huge jump in cases of coronavirus as the country fights to contain the spread of the deadly disease.

The number of infections has increased by 229 to 433, officials said on Saturday, with most of the cases linked to the city of Daegu and surrounding region two hours south of Seoul. 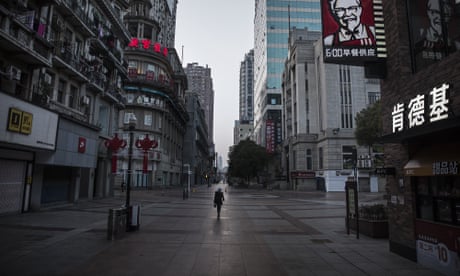 A 61-year-old woman in Daegu is believed to be at the heart of the rapid spread and is thought to have passed the infection to dozens, and possibly even hundreds, of fellow worshippers at the controversial Shincheonji Church of Jesus.

Of the new cases announced on Saturday, 92 have been traced to patients or staff at Cheongdo Daenam hospital near Daegu. “Most of the hospital’s patients who have been diagnosed are those who had been staying as inpatients for mental illnesses,” Seoul’s vice health minister, Kim Gang-lip, told a media briefing.

The area is, however, closely connected to the Shincheonji Church of Jesus. It is the birthplace of its founder, Lee Man-hee, who has donned the mantle of Jesus Christ and claims that he will take 144,000 people with him to Heaven, body and soul, on the Day of Judgement.

County officials said on Friday that a three-day funeral was held for Lee’s brother three weeks ago at a hall owned by the hospital.South Korea’s president, Moon Jae-in, on Friday called for a “thorough investigation” of everyone who attended the funeral and Shincheonji services.

Kim said on Saturday that the outbreak had entered a serious new phase, but still expressed cautious optimism that it could be contained to the region surrounding Daegu, where the first case was reported on Tuesday.

By Saturday morning, the city of 2.5 million and nearby areas counted 283 cases, including South Korea’s first two fatalities in the Cheongdo hospital.

The central government has declared the area as a special management zone and is channeling support to ease a shortage in hospital beds, medical personnel and equipment.

“Although we are beginning to see some more cases nationwide, infections are still sporadic outside of the special management zone of Daegu and North Gyeongsang province,” Kim said during a briefing. He called for strong border controls to prevent infections from China and elsewhere from entering South Korea.

Cases in South Korea have risen elevenfold since the 61-year-old woman became the 31st case recorded by the Korean centers for disease control and prevention on Tuesday. She had not travelled overseas recently, officials said.

In China, the national health commission said on Saturday that there were 397 new confirmed cases of coronavirus infections on Friday, down from 889 cases a day earlier.

The central province of Hubei, the epicentre of the outbreak, reported 106 new deaths, while in the provincial capital of Wuhan 90 people died.

President Xi Jinping has, meanwhile, written a letter expressing thanks to the Bill & Melinda Gates Foundation for the organisation’s support in this month committing up to $100m for the global response to coronavirus, the official Xinhua news agency said on Saturday. “I deeply appreciate the act of generosity … and your letter of solidarity to the Chinese people at such an important moment,” Xi wrote.

Millions of people in China remain confined to their homes as the government tries to contain the spread of the virus, raising serious concerns about economy.

But Liu Guoqiang, deputy governor of the People’s Bank of China, said on Saturday that borrowing costs would be guided downwards to help businesses stay afloat and that the impact of the virus would be “limited”.

As the World Health Organization warned on Friday that the window of opportunity to stop the spread of the virus was narrowing, it appeared to be spreading more widely across the world. Four people have now died from the virus in Iran and Italy recorded its first fatal case on Friday night.

What is coronavirus and what should I do if I have symptoms?

The organisers of the Tokyo 2020 Olympic Games postponed training for their army of volunteers on Saturday due to the coronavirus outbreak, but said that there was “no consideration” of cancelling the Games.

Some 100 passengers who were in close contact with infected people on board began disembarking from the coronavirus-stricken Diamond Princess cruise ship in Yokohama on Saturday, local media said.

They included the last batch of Japanese passengers to leave the ship while some foreign passengers were still waiting on board for chartered aircraft to be sent by their governments. Around 970 passengers disembarked earlier this week, including Britons who are expected to arrive back in the UK on Saturday.

In Australia, six people evacuated back to Darwin from the Diamond Princess cruise ship in Japan have tested positive to Covid-19. Another three people who have developed symptoms were being tested on Saturday.

There were 170 Australians on the evacuation flight and all were checked for symptoms before leaving Yokohama, where they had been kept on the ship.

Reuters, AFP and Associated Press contributed to this report.

... we have a small favour to ask. More people, like you, are reading and supporting the Guardian’s independent, investigative journalism than ever before. And unlike many news organisations, we made the choice to keep our reporting open for all, regardless of where they live or what they can afford to pay.

The Guardian will engage with the most critical issues of our time – from the escalating climate emergency to widespread inequality to the influence of big tech on our lives. At a time when factual information is a necessity, we believe that each of us, around the world, deserves access to accurate reporting with integrity at its heart.

Our editorial independence means we set our own agenda and voice our own opinions. Guardian journalism is free from commercial and political bias and not influenced by billionaire owners or shareholders. This means we can give a voice to those less heard, explore where others turn away, and rigorously challenge those in power.

We hope you will consider supporting us today. We need your support to keep delivering quality journalism that’s open and independent. Every reader contribution, however big or small, is so valuable.

Smoking marijuana may heighten risk of risk of stroke,...