Iran's 'largest internet shutdown ever' is happening now. Here's what you need to know

Iran has gone almost entirely offline as authorities try to stem the spread of nationwide protests that have gripped the country since Friday.

Protesters took to the streets shortly after the government announced an increase in fuel prices by as much as 300%. Social media images showed banks, petrol stations and government buildings set ablaze by rioters. Some protesters chanted "down with Khamenei," according to videos, referring to the country's Supreme Leader Ayatollah Ali Khamenei.

The internet blackout started on Saturday evening and continued through Monday, according to internet watchdogs. Oracle's Internet Intelligence called it the "largest internet shutdown ever observed in Iran."
In other countries where nationwide protests have rattled the political elite -- such as Iraq and Lebanon -- social media has played a key role in mobilizing protesters. It is unclear if Iranian authorities will succeed in quelling the demonstrations by depriving them of this crucial protest tool. 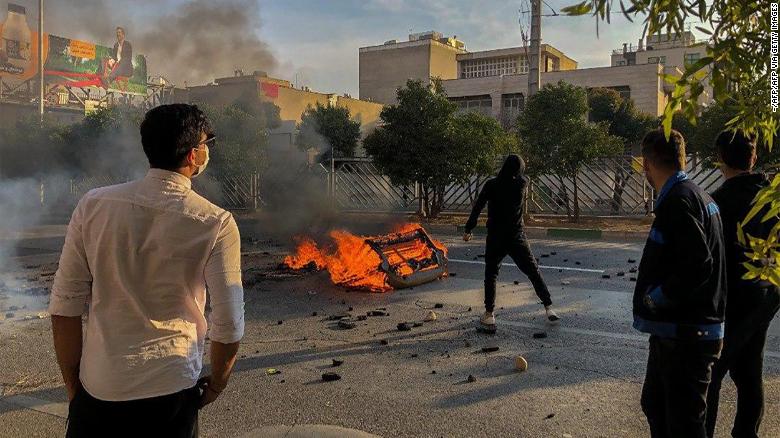 Protesters block a road in the central Iranian city of Shiraz on Saturday.

What sparked the protests?

Protests in Iran have been a long time coming. Popular discontent over the country's leadership has brewed for years as economic conditions continued to worsen, causing nationwide protests to erupt between December 2017 and January 2018.
Since May 2017, US President Donald Trump has unleashed several rounds of sanctions that have crippled Iran's economy, causing its currency to tank, prices to spiral, and trigger shortages in food and medical equipment. As people's living conditions worsened, many Iranians blamed US sanctions for their woes, but also criticized corruption that they believe is widespread among Iran's clerical leadership.
Last Friday, a government announcement about fuel price hikes -- between 50% and 300% -- appeared to be the straw that broke the camel's back. Large numbers of protesters took to the streets in urban centers across the country.
Iranian authorities say the price increase is expected to raise around $2.55 billion a year for extra subsidies for 18 million families, or about 60 million citizens, on lower incomes, according to Reuters.

How have authorities responded?

Several protesters have been killed in the demonstrations, according to government officials. Khamenei, who has backed the fuel price hikes, has blamed the riots on external forces.
"The counter-revolution and Iran's enemies have always supported sabotage and breaches of security and continue to do so," Khamenei said in a live speech on state TV on Sunday. "Unfortunately, some problems were caused, a number of people lost their lives and some centers were destroyed."
Khamenei is the final arbiter on decision-making in Iran. Despite the protests, he said the fuel price increase "must be implemented" while urging officials not to raise the price of other commodities.
Interior Minister Abdolreza Rahmani Fazli has warned that security forces will act against protesters if "vandalism" continues. 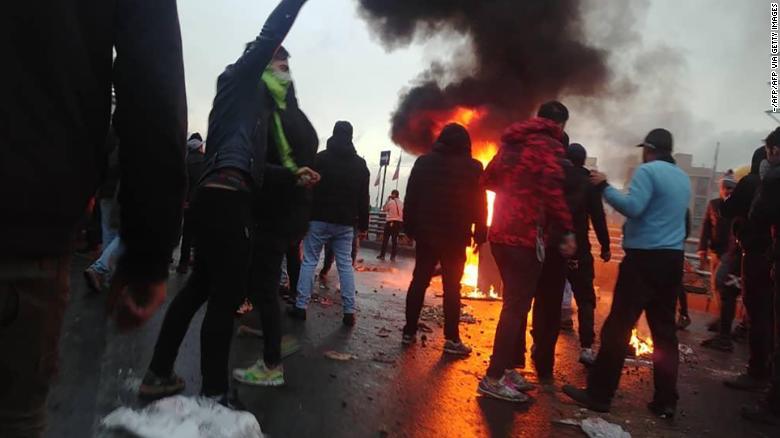 Protesters at a demonstration in Tehran on Saturday.

What is the US' stance on the protests?

The White House has publicly supported the protests. A statement on Sunday from the Trump administration condemned Tehran's use of "lethal force and severe communications restrictions" and chastised the government that "abandons its people and embarks on a crusade for personal power and riches."
US Secretary of State Mike Pompeo also tweeted his "support" for the protests on Saturday.
Washington's reaction echoes Trump's response to the protests two years ago when he called for "change" and denounced Tehran for "failing at every level."
Tehran has, in turn, dismissed the US comments as "hypocritical," highlighting US sanctions as a key driver of the country's economic role.
"It seems weird to see sympathizing with a nation suffering from the US' economic terrorism and the same person who has already said that the Iranian people should be starved to surrender," said Iranian Foreign Ministry Spokesman Abbas Mousavi, according to state-owned ISNA news agency.
When Trump pulled out of the landmark 2015 nuclear deal with Tehran in May 2017, he unveiled his "maximum pressure" campaign which sought to extract major political concessions from Iran through an extreme economic squeeze.
Pompeo initially rolled out a list of 12 demands to restrain what the US calls Tehran's "malign activities" in the region. But since then, Trump appeared to backtrack, recently saying that he aimed only to stop Iran from obtaining a nuclear weapon.
Iran suspended its uranium enrichment activities after signing a landmark agreement with the Obama administration in 2015. But since May 2018 -- a year after Trump reimposed sanctions on the country -- Iran has taken several steps away from its compliance with the nuclear accord. 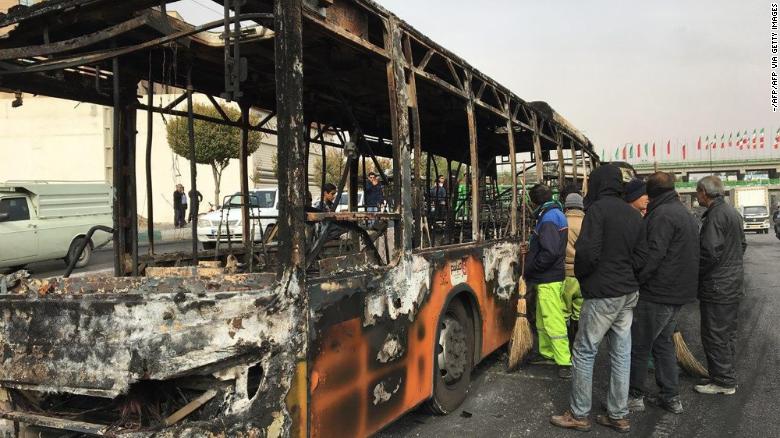 Iranians inspect the wreckage of a bus that was set ablaze by protesters in Isfahan on Sunday.

Are Iran's demonstrations related to other regional protest movements?

Iran's protests took off weeks after demonstrations began in Lebanon and Iraq, forcing governments in both countries to agree to resign. The three protest movements have sought to end corruption, perceived to be widespread among the political elite.
Rapidly deteriorating economic conditions in Iraq, Lebanon and Iran have meant that the protesters have a clear common cause. But the similarities may go beyond economy. Both Iraq and Lebanon are in Iran's sphere of influence, and protests against the status quo could weaken Tehran's sway in both countries.
In Iraq, the Iranian-backed Popular Mobilization Units, which wield significant political influence, have responded violently to protesters. Hundreds have been killed in those protests. In Lebanon, Hezbollah initially suggested protests there were part of an international conspiracy against the Iranian-backed militant and political group. But Hezbollah chief Hassan Nasrallah has since backed the anti-corruption protesters in recent speeches.
Last month, Khamenei accused US and Western intelligence services of "spreading turmoil" in Iraq and Lebanon. He also recalled Iran's response to its 2018 protests, praising the armed forces for "neutralizing" "similar plans" for Iran.
It is unclear whether the protests will do lasting damage to Iran's standing in the region, but its response -- from force to internet blackouts -- suggests that the unrest has unnerved Tehran.

Merkel warns of the biggest threat to German businesses

Crypt photos: the only untouched imperial tomb of Europe...

Bolivia mayor has hair forcibly cut by crowd of protesters

Greeks vs. Erdogan: opening of TANAP gas pipeline could...